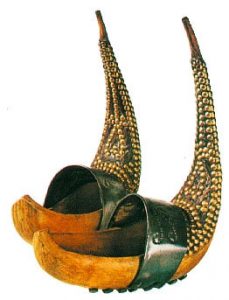 These shoes are a real eyecatcher in our museum. The strange pointy noses bring up questions. Why are they shaped like this? Why are the points so ridiculously large? And the most important one: What is the story behind these shoes? I’m going to tell you the legend of the pointy clogs of Bethmale.

around the year 1000 the Moors had invaded the Pyrenees (a mountain range between spain and france) and, in particular, the Bethmale Valley. The valley was dominated by the Moors. And they could take all the wealth

The chief of the Moors was called Boabdil, like the last king of Granada, of whom he was the distant parent. His son, whose name was Boabdil too, looked like a drop of water, with his black eyes and his dark skin. He spent his time wandering in the fresh meadows in the shade of the hazel trees, or, quietly sitting on the bank of a stream. The chief’s son fell in love with the prettiest girl in the valley. She was called “Esclarlys”, which means “dyed lily on a background of light”. Esclarlys was already betrothed to the shepherd huntsman “Darnert”. The latter had entrenched himself in the mountains with his companions to organize a revenge.

Up there, in the deep forests, near the frozen ponds and vertiginous abysses, they trained in combat, cutting bows and arrows, tracking bears and goats.
But they also spent a lot of their time scrutinizing what was happening in the valley.

The beautiful girl did not hesitate. She let herself be swayed by Boabdil’s soft voice, languid gestures and endless reveries. She preferred them to the rocky and abrupt talk of the mountain boy. It was not long before he was warned of the betrayal of his fiancée. He gave no sign of his feelings, but he was more often seen traversing the mountain, carrying wood, stirring the blocks.

One morning Darnert discovered a walnut uprooted by the storm. The tapered roots of the tree seemed to want to scratch the clouds. He began to saw them and went to wash them in the torrent.

Then he decided to make a good pair of shoes out of this piece of wood. Sitting on a flat stone that overlooked the valley and from which the view extended to all the villages, he dug the root, polished, cut, and succeeded in hooves whose end as a needle went up to the knees.

Some time later, all the shepherds dressed in skins of sheep, bear skins, or wolves gathered in the mountain, then rushed like avalanches into the valley. They were armed with bows, arrows, spears, swords.

The Moors surprised, tried to flee but the shepherds did not leave them the possibility. There was some fierce fighting between rocks and tree trunks in the streets of the village. Blood flowed to the torrent. But doubt was no longer allowed, the shepherds were victorious.

The next day, the victors marched through the streets of Ayet. At their head advanced the ex-fiancé, his face high, his chest swollen. All gathered gathered a cry of amazement at seeing him. At each point of his clogs was a heart: Boabdil’s at the right, and the heart of his unfaithful wife at the point of his left clog.

Since that time, on Christmas Eve, the fiance offers his fiancee a pair of long-hoofed clogs, dressed in leather and richly decorated with golden points drawing a heart (on the top of the clog). He also offers a red spindle, made with all his love – the longer the points are, the greater the love is. In return, the bride offers him a wool knit embroidered with velvet and a purse full of ribbons.